GTA Commuters Might Want to Look at This Before Voting

In my last post, I promised a post about the debacle that is the 407 ETR. The highway that was supposed to relieve the congestion of the 401, and offer another route across the top of the city. The tolls were only supposed to be in place until the highway was paid for.

The the Mike Harris Tories decided to lease it to a Spanish company for 99 years, for $3.1 billion dollars. The result? A luxury route for only those who can afford the exorbitant rates that is many times more expensive than any other toll highway in North America.

Posted by Unknown at 9:59 PM No comments:

Recent polls are showing that the Conservatives are holding a comfortable lead in the 2014 Ontario election. (Although as I write this, I am somewhat comforted by a new poll from this morning.)

When I think of the repercussions of a Tory win, I can barely breathe.

I get it: after 11 years with the Liberals in power, people think it's time for a change. Maybe they're fed up with hearing about Liberal scandals and controversies. Maybe they've heard the "d" words too often: debt and deficit. But for whatever reason, they're turning to the Conservatives.

And that's the part I can't understand. 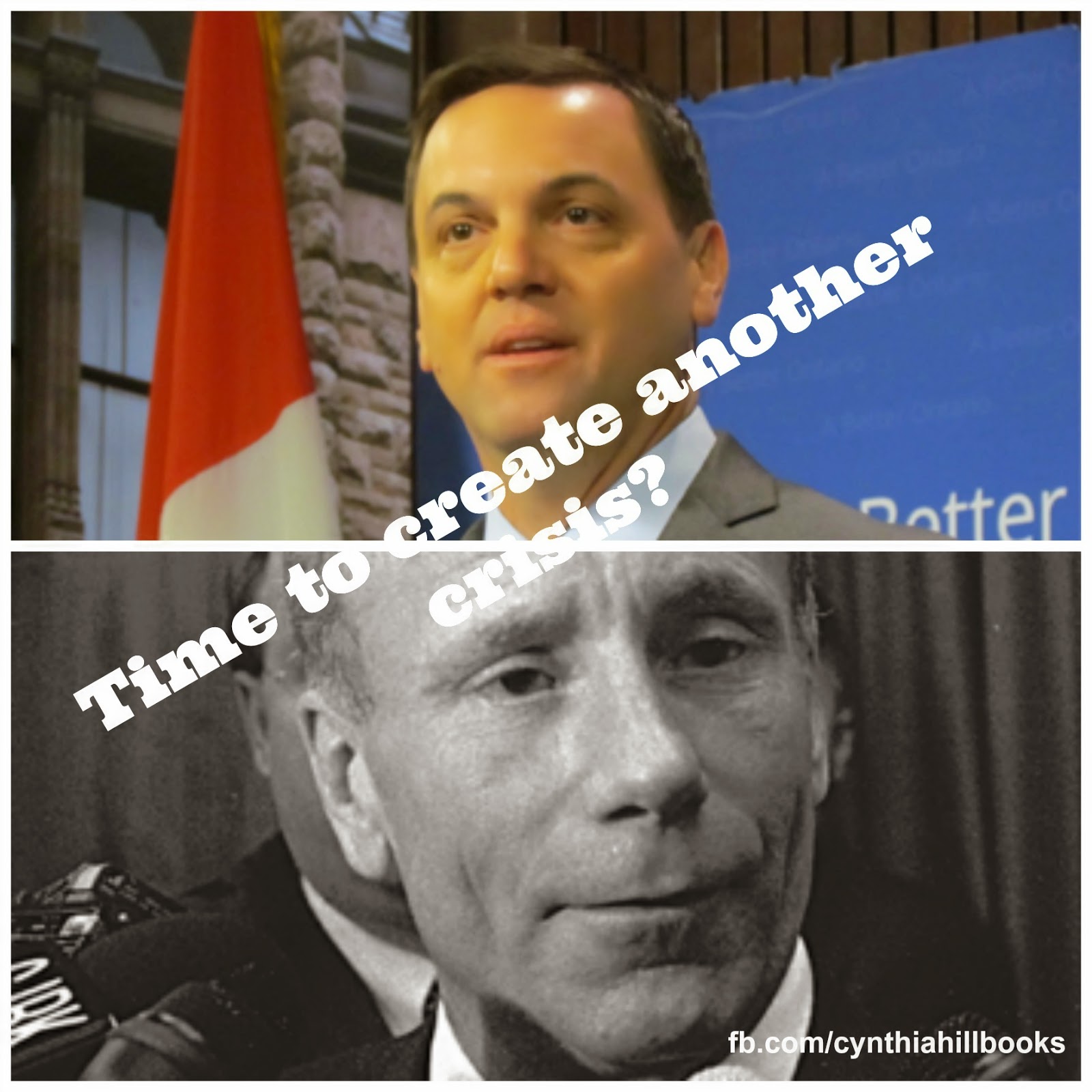 Does no one remember Mike Harris anymore? Have we forgotten the cuts to health care and education? Have we forgotten how John Snobelen, Harris' Education Minister, wanted to "create a useful crisis" so that they could slash and burn the education system without public protest? Have we forgotten the 99-year lease of the 407 ETR highway that gave its new overseers the right to charge whatever they wanted? (I will discuss the 407 debacle in another post.)

Now, Hudak claims that he will cut 100,000 jobs from the public sector, as a way of balancing the provincial budget. The majority of those cuts will come from education. I could go on and on about the way these cuts would destroy the education system (and again, I will in another post) but right now, I'd just like to talk about numbers and statistics.

The truth is, that those 100,000 "jobs" are not jobs - they are people. These are people whose livelihood is now dependent on the outcome of this election. Hudak claims that his plans will actually CREATE 1,000,000 jobs, but how many of those will be part-time, or temporary, or low-wage? If those same 100,000 people lose their jobs, how many of them will be qualified to do these hypothetical new jobs? How many Early Childhood Educators do you know who are qualified to work in road construction?

These are not statistics - they are families. 100,000 families who could be in the position of losing their savings, if they're lucky enough to even HAVE savings, or they're homes, if they're not. These are 100,000 people who will have to explain to their children that there is not enough money to pay for housing and food both. These are 100,000 families who will be faced with losing everything they've worked for. And isn't that the Conservative ideal? That people should work hard, and then they will get the "reward" of a middle-class or upper-class lifestyle (AKA not living below the poverty line)?

As someone on Twitter pointed out, 100k is approximately the population of Waterloo, Ontario. This is equivalent to the entire city of Waterloo abruptly losing their jobs. Does that give an idea of the scale of this mass cut?

What about the families put through hell during a medical crisis because of cuts to healthcare? What about families who never get to see a parent who's stuck in a two-hour commute home at night, because they can't afford the astronomical bills to use the 407 instead of the 401? What about families who will lose their only access to publicly-funded speech and language therapies when their school's special education is cut?

And this morning I found out that the Tories intend to put a halt to any further roll-out of the full day Kindergarten program. My children's school is one of the ones who will finally get this program in September 2014. My youngest child is currently is every other day Junior Kindergarten. Our budget for the rest of the year was based on not paying for his daycare this fall, and I'm sure this is the case for many other families. This abrupt reversal will cost us approximately $400 per month, so overall we will have to add $4,000 over the course of the 2014-15 school year. That's $4,000 that our family could have put into education or retirement savings, or used towards maintenance and repairs on our home or cars.