I was in a pretty good mood when I got to work last Monday morning. I'd barely sat at my desk and turned on my computer, though, when I got the news: "Jack Layton died."

It shouldn't have been a shock. Anyone who saw his gaunt appearance at his last press conference knew it couldn't be good. People talked about the possibility that he wouldn't return to Parliament Hill in whispers, as if saying it too loudly might cause it to happen. 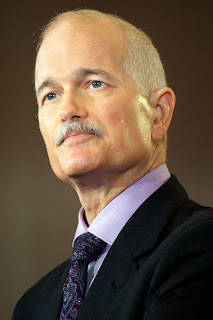 In the past week, I've been kind of weepy when I thought about it. It's not because of any personal connection: like most Canadians, I didn't know Jack Layton personally; in fact, I never even met the man, or saw him from afar. Although I'm not registered with any particular party, I've always considered myself a Liberal who occasionally votes NDP. I've never lived in his constituency, so I have never had the opportunity to cast a vote for, or against him.

Really, me being weepy about something isn't all that unusual. Don't tell anyone, but the truth is I can get weepy over just about anything - happy or sad. Any strong emotion can elicit tears from me. It's kind of embarrassing.I don't think the subtle melancholy I've felt the past week has been my usual hyper-emotional state, though. There has been something about Jack Layton's passing that has affected me, and made me think about what I really believe in.

The title of this blog has always been tongue-in-cheek. As much as I've considered running for political office, I seriously doubt that my "30 Days of Ben Mulroney" entries are likely to help my cause. Layton's passing, though, does make me think a lot about what I believe.

I believe:
In Jack Layton, we saw optimism, and hope for the future of Canada. Not that I'm generally a fan of Stephen Harper anyway, but I just don't see that kind of positive energy from him. He just always seems pissed off and angry. He appears - to me, anyway - like he's looking down on those he claims to represent. Jack Layton never did that. One of the best photos I've seen the past week was of Layton and his wife, Olivia Chow, riding in the Toronto Pride Parade, and looking like they were having a fabulous time.

I want to see Canada have a leader with that kind of vivacity. Not that personality alone makes a leader: you need the brains to back it up; but to see someone leading this country who actually cared what Canadians thought, and what they needed to make their lives better. Isn't that what we need?

As we talked on the day of Jack Layton's death, my husband said, "He was never meant to be Prime Minister." That may be so, but I truly hope that in the next few years of the Harper majority, a leader will emerge who will give Canadians a sense of optimism, and energy. I am so proud to be Canadian. I want the world to be able to see what an amazing country this is, and I want every Canadian to feel the same way.