It's Not About Free Speech

I'm sick of hearing the name "Chick-Fil-A" (stupid name, by the way, but not really the point.) 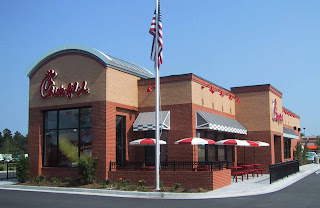 I want to shut up about it. I really do.

I can't sit here and watch you post pictures of yourself gleefully eating chicken sandwiches and waffle fries, or posting about how long the line ups were yesterday for "National Chick-Fil-A Appreciation Day" as if this were something to celebrate.

Because hate is not something to celebrate.

"It's not about hate! It's about free speech!"

Dan Cathy has the right to say whatever he wants. I have the right to think he's a bigoted idiot, and move on, but it's not so simple.

Chick-Fil-A has donated MILLIONS of dollars to the "Family Research Council" and "The Marriage and Family Foundation." These organizations not only support the criminalization of homosexuality in the United States, but they go do "missionary" work in other countries, giving support to laws there that would strengthen laws against homosexuality. Including punishment by DEATH. They support organizations like Exodus International who provide "pray away the gay" counselling (I use that term in the MOST ironic sense) that only does NOT work, but it further shames people for simply being who they are - the person that God created them to be.

In the US, it is still legal in 29 states to fire someone solely for being homosexual - and I'm making a totally uneducated guess here that most Chick-Fil-A restaurants are in states where this is true. Still think that CFA has never fired anyone for being gay? They probably did, but it never got any publicity because it was totally legal.

I'm not going to sit here and tell you how this impacts all of my gay friends and family. It doesn't matter. It wouldn't matter if I had never met a single GBLT person in my life. It's about being a decent person, and not reducing a fellow human being to a "less than." It's not okay to discriminate on the basis of the colour of someone's skin, or their gender, so why is it okay to discriminate on the basis of whom they love?

It's not about chicken. I'm Canadian, and to the best of my knowledge, I have never set foot in CFA. It's not about free speech. It's about right and wrong. And hate, however you dress it up ("Love the sinner, hate the sin" anyone?), is wrong.