Why Do I Care?

So you might wonder why I care about who was elected Mayor of Toronto. Here are a few reasons: 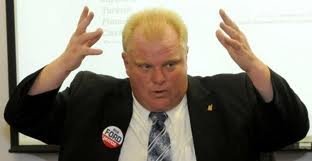 I am not completely terrified of Rob Ford as mayor - just yet. I admittedly do not know much about those who have been elected as councillors, and so I don't know how much of his mandate he will really be able to pass. It could be - as many have speculated - that we'll have gridlock until the next election. Not that four years of a stalemate is a good thing, either, as we've seen in our years of minority federal governments, but at least it may mitigate the damage Ford will likely do. With any sort of luck, we can all just look back on the Rob Ford experience in four years as an amusing anecdote, and let the grownups go back to running the city.
Posted by Unknown at 1:27 PM No comments: